Creatine may have the ability to regulate inflammation, at least after exercise as seen in studies. Creatine has been proven of having positive effects on strength in older adults, especially when combined with resistance-training exercise. One particularly interesting study found that the positive effects of creatine in older adults continued after they stopped using creatine.

Turmeric root contains compounds known as curcuminoids which offer a wealth of health benefits. Because this formula supports more curcuminoids and higher absorbability than standard curcumin, this formula can "amplify" the health benefits for your heart, mind, joints, cardiovascular system, immune system and more. Extend-Release Magnesium supplies the body with magnesium for longer than ordinary magnesium, supporting cardiovascular- and bone health.

Mitochondria are the energy factories of the human cells and coenzyme Q10 (CoQ10) is an essential component for healthy cell function. CoQ10 is required to extract energy from fats and sugars.

Milk protein consists primarily of whey protein and casein among other bioactive compounds such as calcium, vitamin D, vitamin A, vitamin B12, etc. Protein is known for its ability to help maintain and growth of muscle mass1. Protein together with carbohydrates has been shown to have a sparing effect to improve muscle recovery, muscle protein synthesis, and glycogen synthesis2.

For everyone, who leads an active life and is looking for a delicious source of protein. A healthier snack solution on the go, before and after exercise. It gives energy throughout the day and the feeling of doing something good for yourself. No compromise and with a great taste.

A perfect formula for building up and maintaining your muscles. With an indulgent, creamy texture. The shake fits energy-intensive sports, such as long-distance running, triathlon or football. The protein builds up your muscles and the carbohydrates support recovery. Perfect protein shake created to support recovery after a hard workout! Optimising energy metabolism by maintaining higher levels of the body's energy compound adenosine triphosphate or ATP; Increasing myofibrillar mRNA content and protein synthesis, and reducing amino acid oxidation and protein break-down; Increasing satellite cell and myonuclei number and activity in human skeletal muscle; Preventing tissue damage by stabilising cellular membranes and maintaining reserves of ATP. Milk protein consists of primarilyof whey protein and casein among other bioactive compounds such as calcium, vitamin D, vitamin A, vitamin B12, etc. Protein is known for its ability to help maintain and growth of muscle mass5.

Scientific studies show that ubiquinol absorbs up to 8 times better than ubiquinone and higher levels of ubiquinol remain in the blood. Studies measuring exercise-induced fatigue have shown a 90% greater potency of ubiquinol compared to ubiquinone.. In middle-aged mice, ubiquinol was shown to be 40% more effective in slowing ageing processes.

Optimising energy metabolism by maintaining higher levels of the body's energy compound adenosine triphosphate or ATP; Increasing myofibrillar mRNA content and protein synthesis, and reducing amino acid oxidation and protein break-down; Increasing satellite cell and myonuclei number and activity in human skeletal muscle; Preventing tissue damage by stabilising cellular membranes and maintaining reserves of ATP. Creatine is naturally produced in the human body from amino acids L-arginine, glycine, and L-methionine, primarily in the kidney and liver, to help supply energy to body cells. It is metabolized into phosphocreatine, an important storage form used by the brain, heart, and skeletal muscles. What is even more worrying is that a combination of both leads to more severe depletion in cellular. What is particularly frightening is the deficit caused by the dual effects of ageing 53 and statin drug use that can severely weaken the vitality of our cells.

Carbohydrates have shown to improve glycogen synthesis. A lack of glycogen stores in the muscle and liver can limit the performance capacities if the body during prolonged or higher intensity exercise7.

During exercise loss of sweat can cause dehydration. Dehydration causes reduced blood volume and thereby the heart rate increases. Carbohydrate-electrolyte has a significant role in energy balance, by a restoration of glycogen and minerals. The fluid contributes to lowering of heart rate while the minerals help restore the electrolyte balance which will boost the process of water absorption8.

Glutathione (GSH) is a ubiquitous antioxidant and is the keystone of the body’s cellular antioxidant defence system and regulates many aspects of immune function. Cysteine is the rate-limiting amino acid for the synthesis of GSH. Milk protein and specially whey is rich in cystine (disulphide form of cysteine). Intake of whey protein has shown to enhance glutathione synthesis and protects against oxidant-induced cell damage11.

gut has not been established there is strong indicating that consumption of fermentable dietary fibres increase the proportion of beneficial lactic acid bacteria in the human colon. Also fibres can modulate immune parameters in gut-associated lymphoid tissue which is the body’s first line defence from environment12.

Curcumine Elite: Take one (1) capsule daily, with food, or as recommended by a healthcare practitioner.

Creatine Capsule: Suggested daily intake is two (2) capsules twice, with water or juice, or as directed by a medical practitioner.

Super Ubiquinol CoQ10: Suggested daily intake is one (1) softgel once or twice with food, or as directed by a medical practitioner.

For product details, please refer to the individual components of the Basic Mobility & Energy Starter Bundle: 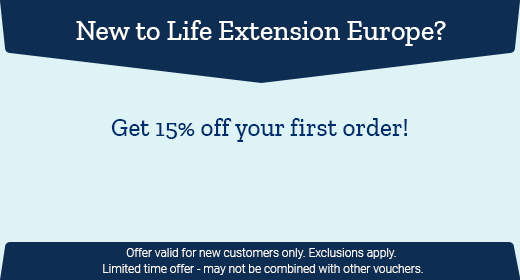