Show all categories Herbs & Botanicals Back
NEW! Membrane Mend™ for cellular longevity and integrity, and energy 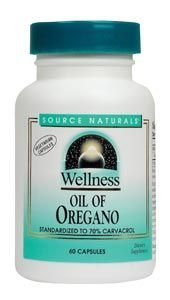 Item #12779 60 Capsules 1 per serving In Stock
Oil of Oregano, 60 capsulesis a supplement/vitamin for you if you are interested in Food, Diet & Lifestyle
This product cannot be shipped to following countries:
Product details Supplement Facts Reference
Product details "Oil of Oregano"

Source Naturals Oil of Oregano is from wildcrafted true oregano (Origanum vulgare), an aromatic herb that is native to the Mediterranean region. Traditionally, oregano was used to support digestive, respiratory and joint health. Recent in vitro research indicates that carvacrol, an active constituent of oil of oregano, may provide support to the immune system. Source Naturals Oil of Oregano is one of the most potent on the market and is standardized to 60% carvacrol.