Read about the inflated health care cost in The United States 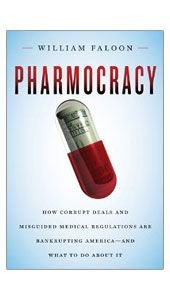 Read about the inflated health care cost in The United States

Item #33835 Out of stock - Restocked within 14 days
Pharmocracy, by William Faloonis a supplement/vitamin for you if you are interested in Books & Media, Diet & Lifestyle

€12.95 €12.95 Save
Free Shipping
on orders over € 69
Money Back Guarantee
We have a 100 days return policy, not the standard 30 days!
Daily Shipping
Order before 11:00 CET, for same day shipping (Mon-Fri)
Customer Care Advisory
We can help you in 6 languages
Product details "Pharmocracy, by William Faloon"

In a startling revelation, medical costs for a family of four will run $19,393 in the year 2011. That is an increase of $1,319 from 2010 and double what it cost in 2002. The obvious problem is that typical families cannot afford $19,393 yearly. Neither can their employers, their insurance companies and certainly not our debt-laden state and federal governments.

There is a free market solution to today’s artificially inflated health care costs. Congress can amend the law to allow free market forces to drive down sick care costs, better enable the prevention of diseases, and facilitate rapid development of improved medical therapies. A just-released book titled Pharmocracyprovides factual documentation to reform the broken health care system that plagues the United States. It is more than 300 pages long because there are at least that many underlying reasons why medicine costs far more than it should. Until now, no one has identified and amalgamated the plethora of illogical regulations that cause health care to be so overpriced.

While Pharmocracyexposes FDA corruption and ineptitude, Congress is the body of government that provides the FDA with enabling laws that ultimately result in needless suffering and death,  while the nation descends into financial ruin. Implementing free-market approaches described in Pharmocracycan spare Medicare and Medicaid from insolvency while significantly improving the health and productivity of the American public. Pharmocracyprovides an irrefutable and rational basis to remove the suffocating compulsory aspect of health care regulation. It then documents how the free market can provide superior health care at far lower prices while better protecting consumers.

Fight back against institutionalized corruption that is rendering this nation insolvent. Pharmocracyprovides a blueprint for motivated citizens to tear down the bureaucratic barriers that push health care costs beyond the financial reach of the typical American. William Faloon has been sounding the alarm bell since the early 1980s about the devastating economic consequences of overregulated medicine.

Faloon has authored hundreds of articles and made over 400 media appearances exposing FDA failure, deception and abuse. He has shown in meticulous detail how over-regulation is the underlying cause of artificially inflated healthcare costs, as well as how simple it is for Congress to amend the law to allow free-market competition to drive down medical costs and spare Medicare and Medicaid from insolvency. Since 1980, William Faloon and the Life Extension Foundation® have uncovered pioneering approaches for preventing and treating the diseases of ageing. These avant-garde medical advances were chronicled in Life Extension’s publications many years before conventional doctors recognised them.

In 2003 William Faloon compiled a 1,500-page medical reference book, Disease Prevention and Treatment. Updates to this reference book are available online. Faloon has been featured in hundreds of media appearances, including The Phil Donahue Show, The Joan Rivers Show, Tony Brown’s Journal, ABC News Day One, and Newsweek magazine.