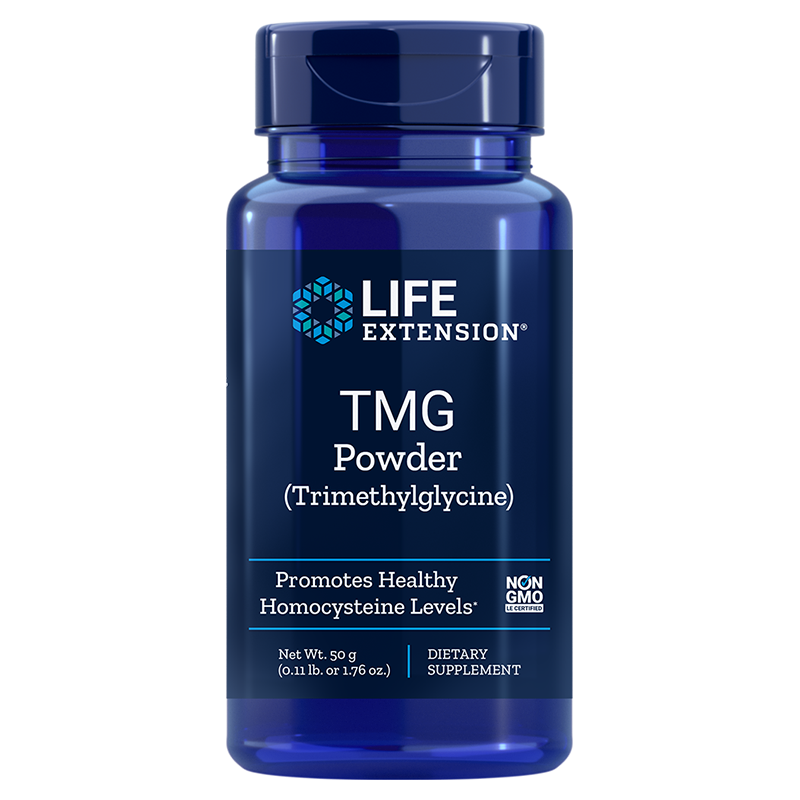 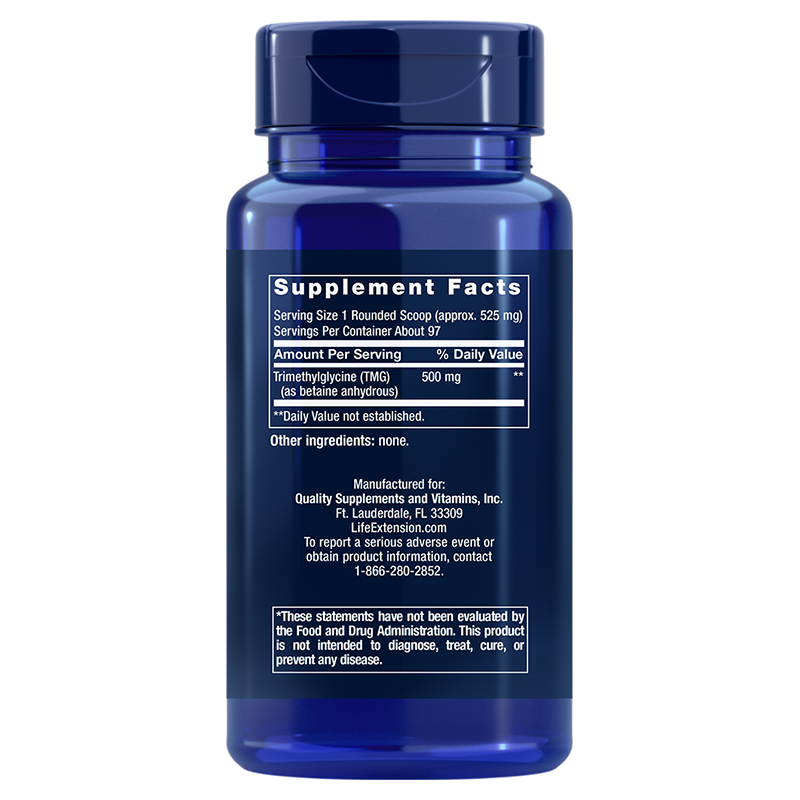 For you, if you are interested in supporting cardiovascular health


The innovative formula of TMG Powder can:

Trimethylglycine (TMG) has been known as a heart-healthy amino acid compound since the 1950s. That’s more than 50 years of scientific research to rely upon.

€14.76 €14.76 Save
Free Shipping
on orders over € 69
Money Back Guarantee
We have a 100 days return policy, not the standard 30 days!
Daily Shipping
Order before 11:00 CET, for same day shipping (Mon-Fri)
Customer Care Advisory
We can help you in 6 languages
Product details "TMG Powder"

First of all; what is TMG? Trimethylglycine (TMG), also known as glycine betaine, refers to three methyl groups attached to each molecule of glycine.

When a TMG methyl group is donated to a molecule of homocysteine, it becomes a beneficial amino acid, methionine.

Wheat bran is the main dietary source of TMG, with smaller amounts available in other cereal grains. (1) TMG can also be made in the body from choline, an essential nutrient found in eggs, soybeans, and many other foods. (2,3)

While working to promote healthy levels of homocysteine, alone or in conjunction with other nutrients, TMG has been attested as an important nutrient for cardiovascular health.

By having a positive impact on your homocysteine levels, TMG can help you stay healthy by supporting multiple systems throughout your body.

In the 1950s, TMG was discovered to be beneficial to the heart and it seems to function in a similar way as some of the B vitamins (B6, B12, and folate). And like B vitamins, TMG is a methyl donor, providing extra methyl groups to hasten the conversion of homocysteine back to methionine. (4-6)

When a TMG methyl group is donated to a molecule of homocysteine, it converts it to the non-toxic amino acid, methionine. (7)

The role of TMG in healthy homocysteine metabolism is even more important when B vitamin levels are low. (8) Some evidence suggests TMG may be more efficient at regulating homocysteine levels than folate. (9)

Research showing TMG's ability to promote healthy levels of homocysteine already within normal range, alone or in conjunction with other nutrients, confirms its status as an important nutrient for cardiovascular and overall health. (7,9)

Studies show TMG can support a healthy inflammatory response by inhibiting the expression of NFkappaB, TNF-alpha, and other inflammatory proteins, which may partially explain its positive impacts. (14)

Because intestinal microbes can make various by-products from TMG, the health of the gut microbiome influences the effects of TMG in the body. (15,16)